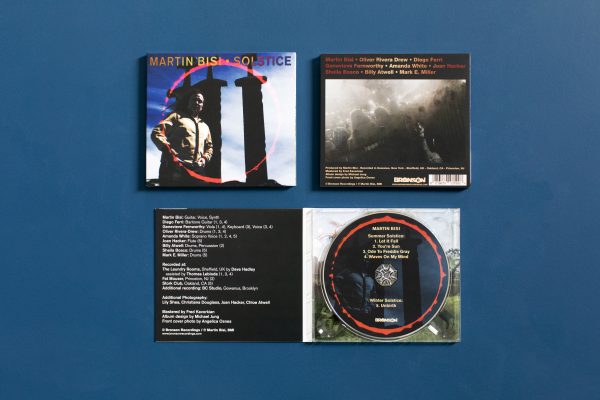 Martin Bisi, the NYC post-punk producer releases Solstice, his first solo record in 5 years: a psychedelic journey through light and shadow, split between Summer and Winter Solstice.
Out of any trend, Bisi new album will be out worldwide Novembre 8th 2019!
Operating out of his Brooklyn studio, BC Studio (celebrated in the two volume of BC35 released by Bronson Recorindgs), for almost 40 years now, Bisi has brought his style to a disparate slew of crucial albums, from hip-hop to noise-rock and beyond. An underground celeb behind the console, but Bisi has also been recording and releasing music of his own since 1988. Solstice is his sixth full-length album and ninth release in all, where dense layers of sound combine in cacophonous and electrifying ways. Something like early Sonic Youth crossed with “Bitches Brew”, a stomping post-punk vibe churns beneath a wild array of tones and rhythms.

Martin Bisi (1961) – producer, engineer, musician, and central figure in New York City’s musical history of the past four decades.
BC Studio – the Brooklyn studio Bisi founded in 1979 with friends Brian Eno and Bill Laswell, and still owns and operates to this day. A cavernous space located in an industrial building near Brooklyn’s Gowanus Canal, the studio’s idiosyncrasies are undeniably responsible in part for the sounds created there.
At BC Studio, Bisi has personally recorded landmark music by Sonic Youth, Swans, Unsane, Afrika Bambaataa, Herbie Hancock, John Zorn, and so many more.Bisi’s name is synonymous with the New York City underground.

Disparate sounds – from hip-hop to noise-rock to the far reaches of the avant-garde – have added up to a logical whole under the umbrella of BC Studio.

Bisi was immortalized in the 2014 documentary film, Sound and Chaos: The Story of BC Studio, chronicling his life and career as a pillar of underground music in New York City and beyond.
Before coming back with a brandnew opus under his own name, Bisi worked on BC35 chronicles.BC35,(Vol.1/Vol.2 – Bronson Recordings) is a celebration to the 35th anniversary of BC Studio, and serving as a unique document of the New York City underground.
BC35: A weekend of performances, recorded live at BC Studio in January 2016 as a celebration of the studio’s 35th anniversary. Consisting of improvised pieces, as well as songs written exclusively for the occasion, the performances comprise an absolute who’s-who of BC Studio alumni – roughly 50 participants, including current and former members of Sonic Youth, Swans, White Hills, Foetus, Cop Shoot Cop, Live Skull, Pop 1280, Violent Femmes, The Dresden Dolls, Alice Donut, Lubricated Goat, and more. Bisi himself played guitar on three of the improvised pieces.

“Bisi… the man who contributed to the sound of early hip-hop, avant-garde, and indie rock, might soon finally get recognition… Considering how diverse BC Studio’s output has been over the years, there’s still something recognizable about the music that Bisi lays his hands on… A certain rawness.”
–Newsweek