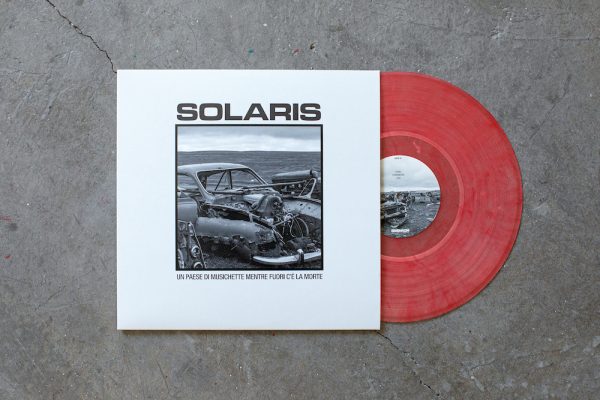 Italian noise post-rockers SOLARIS unveil details on new album ‘Un Paese di musichette mentre fuori c’è la morte’, out June 19th on Bronson Recording.
Cesena’s 90s-infused heavy noise foursome SOLARIS present their very own perception of noise-laden post-rock through powerful riffs, magnetic vocals and industrial soundscapes. With “Ezikmndrek”, they take their audience to post-rock industrialized wildernesses driven by Alberto Casadei’s gravelly Italian vocals.
Say the band: “Pochi secondi di dubbio e remore infinite” (“A few seconds of doubts and endless hesitations”) it’s the opening sentence in Ezikmndrek, the song that previews out brand new debut album. It’s a song about the urgency of making a choice and the doubts that fill your head in hard times. As you can hear on the album, we created lyrics and atmospheres that moves from the inner space to the infinite and obscure universe, splitting the instrumental part into persisting grooves and post-metal riffs. Ezikmndrek is personal and introspective, but lets you merge into it’s very own atmospheres.”
Debut full-lengh ‘Un Paese di musichette mentre fuori c’è la morte’ settle the quatuor deep into the prosperous Italian underground scene by means of six inspired tracks recorded and mixed by iconic producer Martin Bisi (Sonic Youth, Swans, Unsane). From noise to heavy psych, SOLARIS juggle with noteworthy influences such as Helmet, Disastroid or The Jesus Lizard. Their tortured melodies produce mechanical and resonant emotions to the listener, definitely absorbed by their sonic invitation. Photo by Adriano Zanni. Layout by Supernulla.
Producer Martin Bisi comments: “With Solaris I felt there was a meeting of similar esthetics, of a common language. This was the product of a musical culture that has been evolving over decades. And Solaris had a strong sense of their own sound and identity. At Duna studio where we recorded, i similarly felt like it was an outpost of the studio in Brooklyn where I’ve worked since 1981. We made a record that travels like through scenes from a sci-fi film, cinematically post metal and industrial.”

Solaris formed in 2015 between Cesena and Mercatino Conca, on the hills of Emilia-Romagna region. Alberto Casadei (guitar and voice), Paride Placuzzi (guitar), Lorenzo Bartoli (bass) and Alan Casali (drums) pay tribute to the sci-fi writer Stanislaw Lem with their band name, and also to Failure, one of their greatest inspirations.
After one year of rehearsals, they decided to release their first album “L’Orizzonte Degli Eventi”, recorded in the early months of 2017 at StoneBridge Studio (Cesena) by Andrea Cola and Alan Fantini and mastered by Stefano Cappelli at Creative Mastering. The EP, with special guest Andrea Fioravanti (Postvorta) playing guitar in the song “Leviatano”, was self-released but then re issued by Floppy Dischi and Drown Within in 2018.
Two years of touring had Solaris share the stage with band such as P.I.L, Ufomammut, Sacri Monti, Mood, Marnero, Fuzz Orchestra, Johnny Mox, Buñuel, Asino and Cosmetic After a pre-production session at StoneBridge Studio, Solaris went back to the studio to record a new album in December 2019. The New record “Un paese di musichette mentre fuori c’è la Morte” is released via Bronson Recordings and recorded by legendary producer Martin Bisi (Swans, Sonic Youth, Unsane) at Duna Studio in Russi (Ra), Italy. Mastered by Fred Kevorkian at Workshop Studio in Brooklyn, NY, is set to be released in June 2020.