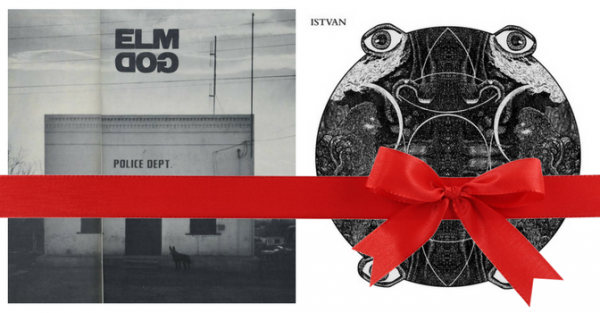 Small towns in the countryside are all obstinately the same wherever you go: loneliness, abjection, rage. From a godforsaken place somewhere up in the North, The ELM tell their stories with languages and images of the American Bible Belt, land of obsessed preachers and sleazy moralism, cradle of inveterate losers and alienation.
This is the setting of the stories they tell in their new album DOG wandering places lost somewhere between reality and imagination: swamps and deserts where God is just a mere memory that leaves only a pale reflection, a dark and distorted echo that fosters the need for the absolute of irredeemable Sinners who live under the burden of their stories.
Stories from the darkest places of our society that nobody wants to tell, stories that need no judgement, where the outcasts end up unsurprisingly all in the same way. Stories told through killer riffs and nasty plots by four respectable members of the community, who live the honest and relaxed small-town life.
Picture-perfect white-collars trying to keep the balance in their double life that lies on the edge between clarity and filthy insanity, the ELM welcomes you to the delightful Italian forsaken suburbs, where the Southern cross the dog.
Recordings Info
DOG was recorded live at Elm’s rehearsal studio in April 2017. Mixing process came immediately after. Elm used every piece of their instruments taking every single sound to the extreme limit . Holed up in their den, they used no producer from outside, since they already knew exactly the sound of DOG: a dirty, sharp crushing evil’n’roll, constantly overloaded.
Ettore Dordo from Hubsolut Studio from Cuneo (IT) took care of the mastering process with a clear hint: bring the sound over the maximum impact level. Enjoy the Cult.
All Songs by ELM
Except “Folsom Prison Blues” Written by Johnny Cash
Recorded and mixed at ELM’s Rehearsal Room in april 2017
Mastered by Ettore Dordo at HUBsolut Studio, Cuneo (IT)
Released via Bronson Recordings on Vinyl BR012/007 (barcode 8033622535812),
CD BRCD/002 (Barcode 8033622535829) and digital.
Released October 20, 2017 (Italy & EU), December 12, 2017 (Worldwide)
USEFUL LINKS
FB ELM
https://www.facebook.com/elmcult/
INSTAGRAM ELM
http://instagram.com/elmcult
Bandcamp ELM
https://elmcult.bandcamp.com/releases
FB Bronson Recordings
https://www.facebook.com/bronsonrecordings/
Bronson Recordings Website
http://bronsonrecordings.com/
Bronson Recordings Bandcamp
https://bronsonrecordings.bandcamp.com/
Online Store
http://bit.ly/ELMDogCD

All in their early twenties, the members of Istvan hail from Forlì, a misty suburban city 50 miles south of Bologna. Their debut-album is almost totally instrumental, influenced by heavy psych as well as contemporary doom wizards, and inspired by German physician and religious poet Angelus Silesius. Through stoner riffs, doomy tempos and rarefied drones, the Istvan sound is like a vulcanic heat enveloping post-rock mists. Earth, Om, Earthless, Black Sabbath, Slint and guitar guru John Fahey all left their mark on Istvan’s s/t album.